CP Advisors advised Cobreco on the sale of the business to Chancerelle for Eur. 35 million in cash 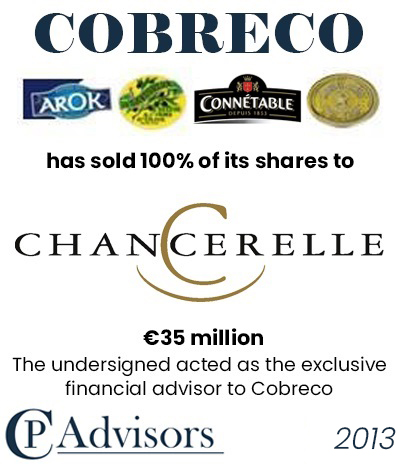 Compagnie Bretonne de la Coquilles Saint-Jacquess (“Cobreco”) is a leading manufacturer and marketer of canned tuna and scallops, which are marketed under the well known brands Arok and Jacq. The highly automated cannery of Cobreco processes over 25 million cans of tuna per year and in 2012 generated revenues of approximately Eur. 30 million. Cobreco markets its products to the major French retailers both in the branded and private label segments. Chancerelle is the third largest French canned tuna and sardines manufacturer, well known for its brand Le Connétable.

CP Advisors acted as the exclusive financial advisor to Cobreco on the divestiture of the business to Wenceslas Chancerelle for approximately Eur. 35 million in cash.