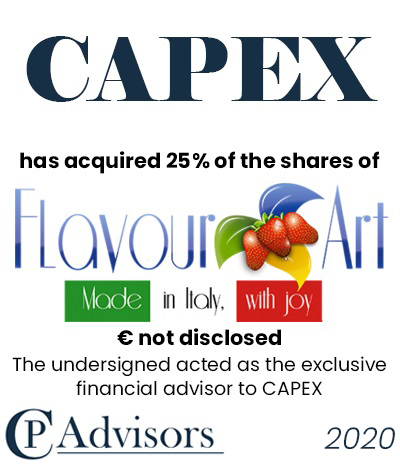 Founded in 2006 by Massimiliano Mancini and his wife Anna Facchino, FlavourArt is a leading group active in Italy and North America in the production and marketing of liquid flavorings for the food, confectionery, beverage, liquor and electronic smoke industries.

With two production sites in Italy (Oleggio) and one in Canada (Beamsville), FlavourArt operates directly in Canada, the United States, Germany, Belgium and Italy through the subsidiaries FlavourArt North America, FlavourArt Gmbh, FlavourArt BvbA and Regazzi Group, and indirectly in on a global level through important commercial partnerships.

The Group represents a distinctive industrial reality operating at an international level and recognized for its strong focus on quality and research and on technological and product innovation.

About 50% of the group's turnover is generated in the USA through the Canadian subsidiary FlavourArt North America; the remaining 50% in Europe and worldwide, in countries such as Italy, UK, Germany, Russia, France, Serbia, South Korea, Turkey, Thailand, Malaysia and Paraguay. To date, over 85% of turnover is generated by flavorings, with over 300 product references and customers present in more than 30 countries. The remaining 15% is represented by flavored liquids for electronic cigarettes.

CP Advisors acted as Capex's financial advisor in the acquisition of 25% of the FlavourArt Group.